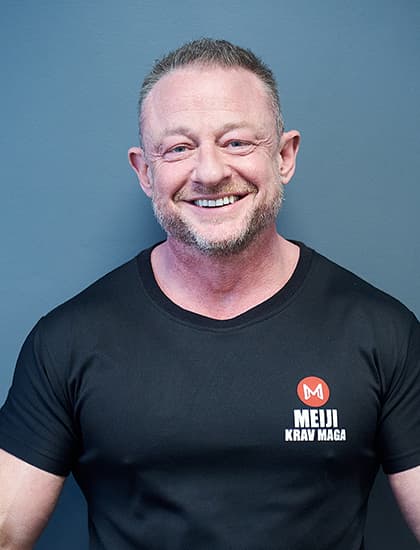 Mark Roberts joins the team to lead on teaching the Meiji instructors the combat art of Krav Maga. Mark has been training in martial arts for 35 years and teaching for 25 years.

Krav Maga is a relatively new art, a no-nonsense military self-defence and combat art which has been adapted for the Israeli security forces, originally developed by Imi Lichtenfeld in the 1930's in Czechoslovakia.

Derived from a combination of techniques from boxing, wrestling, judo and karate, Krav Maga is becoming increasingly popular as a very simple but effective martial art which is popular with both men and women.

Mark is a full time Master Instructor in two different Krav Maga systems, Urban and Israeli, and a black belt in five martial arts. He has developed his skills in Israel and is one of the leading instructors in the field. Mark is now working with the Meiji instructors to pass on some of his extensive knowledge and skills.

Mark said: "Krav Maga is not really about medals or points or trophies, it is a very pure and no nonsense martial art with techniques which gives people that empowerment.

"It is about learning strategies to protect yourself - it takes from lots of different martial arts but is very stripped back and simple in its approach."